A story about business purpose 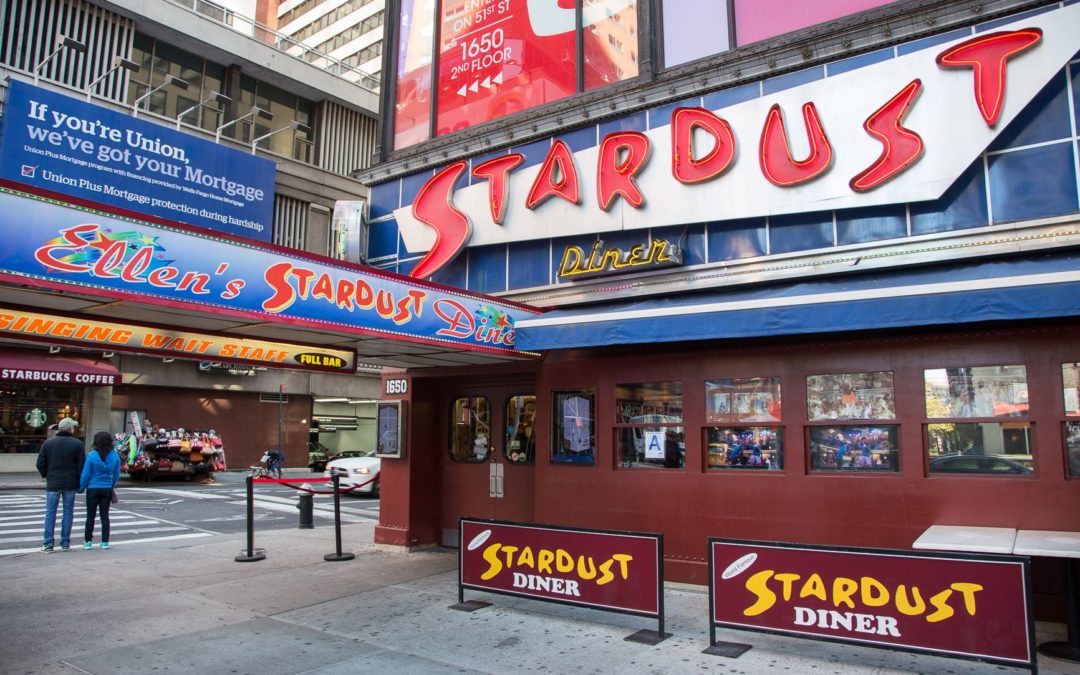 You don’t often expect to go on holiday and gain a fantastic business insight, but on a recent family trip to New York, my daughter persuaded the family to go to a place for breakfast that her friends had recommended.

It’s called Ellen’s Stardust Diner, and they have singing waiters and waitresses, or waitstaff in American! It was only a few blocks from where we were staying and, although the idea did not appeal to me very much, I agreed to go.

As we turned the corner on to the street, I saw a long queue in front of me. I don’t do standing in line very well and would have rather gone to the restaurant around the corner with no queue (and no singing either!). But we decided to stay, and as we did so, we could see inside through the window. The place was packed, and people seemed to be enjoying themselves. What a commercial gold mine, I thought.

Eventually, we got in and took our seats in the packed ‘diner’ which spread over two floors. We were soon listening to a song from ‘Wicked’ being sung with full gusto by one of the waitresses. Then one after the other, different people from the waiting team were called up, and each one sang extremely professional renditions of some Broadway songs. The crowd loved it, joining in and clapping at the end of each song. It certainly created a great experience and a brilliant atmosphere.

The recipe for success

In between the entertainment, we managed to order our breakfast from the ‘all American’ menu. We waited quite a while for the food to arrive, but somehow that didn’t matter because of the ambience and continuous entertainment. How clever I thought – they are swamped; it takes them a while to get all the orders out, but people don’t mind because they are enjoying the entertainment. When the food finally arrived it was excellent and well worth the wait.

This restaurant is the third business of its type in New York. It made my mind wander to thinking about the business aspect of this restaurant and what a commercially successful business it must be. They have gained success by differentiating themselves in a very crowded market – nowhere else in New York has singing waitstaff.

They don’t take pre-bookings either which means that people are prepared to wait for up to an hour to get in and have their meal. They have created a demand like no other; hundreds of covers each day. Wow – they must be making a ‘mint’ with such great business idea. If the business insight was just about differentiation, I would stop here – but it is about so much more than that.

Halfway through our breakfast, the compare who had been introducing each song stopped and took to the mike himself; not to sing but to tell the story of the restaurant. Ellen, who had started the business, had seen a lot of incredible talent that never made it on to the Broadway shows. She wanted to do something about this; she wanted to help people make their dreams come true and to star into Broadway productions.

So, where is the connection between this massive ambition and the restaurant? Now, here is the really clever bit. The restaurant was actually established as a way of supporting this driving purpose. A means to an end, if you like.

How does it work? The icing on the cake

Every single person who worked in the restaurant, as waitstaff, has a performing arts degree. They have a desire to get onto Broadway. The restaurant has a collection at every sitting for the performers – the proceeds from this collection are then divided equally amongst the staff. And here’s the kicker; they must only spend this money on singing lessons to improve what they do! So not only do they get subsidised singing lessons, they also get an opportunity to practice every single day they work! Genius.

The success is extensive.m Over 140 people that worked at Ellen’s Diner have gone on to perform in Broadway shows. Currently, somebody who has worked at the Stardust Diner is involved in every Broadway show!

As Wikipedia describes the success:

Ellen’s Stardust Diner is considered a breeding ground for singers. Former Ellen’s staff members have been known to star in almost every Broadway and major off-Broadway musicals such as Avenue Q, Jersey Boys, The Lion King, South Pacific, In The Heights, On The Town, Wicked, and Godspell.

The driving purpose of the business is to help performing artists to get better at their trade and to enable them to make their dreams become a reality by securing top-performing roles. Along this journey they have created an extremely profitable business which is differentiated, in no small part, by its purpose. This, to me, is a fine example of a business founded on a bigger purpose that drives the whole organisation; the commercial success is almost secondary.

The emotional connection from all in the diner was amazing – not only did people enjoy the experience, they felt a real connection with the purpose – who does not want to help hopeful wannabes to achieve their goals?

So, if you ever find yourself in New York, I would now highly recommend you find Ellen’s Stardust Diner and enjoy a great breakfast with great music!

Oh, yes, and try and work out what is the bigger purpose for your business.

This article was originally posted on LinkedIn.